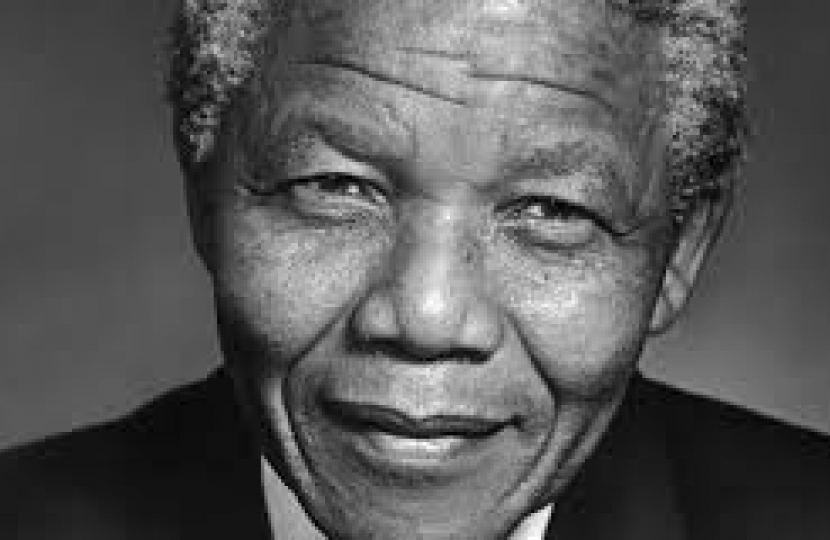 I cannot compete with some of the moving and absolutely amazing stories of personal interaction with Nelson Mandela that we have heard today. I met him only once, along with 5,000 other people, in Trafalgar square in November 2010. His speech was as electrifying as the shirt he was wearing.

I knew that I was in the presence of an exceptional human being and I am simply one of the millions who was moved and encouraged by his story of fortitude as he attempted to change the world around him—and succeeded in that attempt—which we have heard expressed so passionately by the right hon. Member for Tottenham (Mr Lammy). I am grateful to you, Mr Speaker, and I am sure that the House is too, for interrupting our normal proceedings to pay tribute to the life of an incredible man. He stands head and shoulders above any other in shaping and influencing our modern world.

Some might say that Nelson Mandela was destined to lead. First, coming from a family with heritage and influence, he was politically motivated from an early age, studying law, opening the first black law firm in South Africa and focusing on human rights. That background, coupled with his unique style of leadership, convinced his peer group that he was worth supporting in the fight against apartheid. He displayed a rare combination of determination, humility and integrity, willing to engage with the hotel porter he met in passing with the same energy and enthusiasm as with the VIP guest he had arranged to meet. To put it simply, he had enormous personal presence, not just because of his rank or appointment but because of his infectious smile, his provoking message and his tenacity and endurance in thinking that good would triumph in the end.

His political activities saw him tried and imprisoned for 27 years. Who would have thought that just four years after his release apartheid would be over and Nelson Mandela would be President? As many others have, I visited Robben Island off Cape Town and peered through the bars of Nelson Mandela’s cell. It is very hard to imagine anyone emerging from such an experience without feeling embittered towards their captors, so it was with some apprehension that South Africa, and the world, waited to see what Nelson Mandela would do with his power as President and where the country would go. He continued, after all, to have strong ties with Russia and the South African Communist party. Such was his popularity that he had almost a free mandate to take South Africa in any direction he chose.

I recall Nelson Mandela’s release from prison. I was president of Loughborough student union at the time and I must confess that that was an academic establishment that was as yet unknown as a cauldron of simmering political activity. I recall that the hon. Member for Liverpool, West Derby (Stephen Twigg) was the president of the National Union of Students at the time and we conversed on many occasions. We debated a motion at Loughborough students union to change the name of the union building to the “Nelson Mandela building”—something that many other universities had already done. At Loughborough, perhaps unwisely, the motion was defeated, because although Nelson Mandela’s cause was very much supported, students were not sure where he would take South Africa, bearing in mind the fact that the ANC still had an extremist wing. It is perhaps that second significant chapter of his life, evolving from a campaigner to a statesman, that distinguishes him from many others who have liberated their country, then taken the reins of power. Perhaps the best and saddest example is Robert Mugabe, not far away in Africa, who not only failed to endorse any system of democracy but continues corrupt practices to retain power, as well as encouraging racial division and, indeed, hatred of Britain, the former colonial power.

Nelson Mandela’s ability to face down hardliners in his own party and convince a sceptical white community helped South Africa to re-engage with the world community. In government, he proved to be pragmatic and even-handed, taking time to look at and, indeed, learn from a number of models of government, and working with de Klerk, who had his own task of winning over people with extremist views if civil war was to be avoided. How different things might be, for example, had Mandela not supported the freedom of the press or an independent judiciary. Establishing the Truth and Reconciliation Commission was a stroke of genius—a concept that has been copied, but not used as successfully, in countries attempting to heal the wounds of division.

Most astonishingly, as has been said by hon. Members, Mandela stood for only one term—perhaps a lesson for us all in recognising our sell-by date. Interestingly, such was his ability to reach across divides, even in death his work continues. Attending the memorial service alongside obvious leaders such as the Prime Minister and President Obama will be President Castro of Cuba and the new Iranian President Rouhani. Who knows what diplomatic developments might result from an imaginative seating plan?*

There are difficult questions for the ANC now that it has lost its iconic figurehead, and it must ensure that South Africa’s multiracial free-market democracy can flourish. Those are questions, however, for another day, and Britain’s involvement in that is for another day too. Today and this week are about saying goodbye to a man who survived and defeated apartheid, and united a country. Sadly - and this applies only to a minority—some people have questioned why in this country so much attention has been given to Nelson Mandela’s death. A small but arguably growing slice of our society takes for granted the leadership and sacrifices that he and others closer to home have made. I pondered that very point this weekend, as on television tributes to Nelson Mandela contrasted with reality TV shows on which household names are engineered.

That raises awkward questions for us in the House, as some members of the younger generation know more about James Arthur, perhaps not the best role model, than leaders who triumphed over adversity to give us the very freedoms that we could be in danger of taking for granted. Thankfully, many people of our generation have been inspired by Nelson Mandela and others to recognise how their own high profile can be used to shape a better world. AIDS awareness is a clear example of that. Rightly, they will take their seat alongside world statesmen at the funeral this week.

I am pleased that the House can pay tribute to Nelson Mandela today. We cannot match the wonderful poetry, the song and the colour that we have seen on our screens displayed by the people of South Africa as they remember the architect of their country. As we consider Nelson Mandela’s legacy I hope that we all recognise, learn and gain inspiration from one individual who became a global symbol of tolerance in standing against injustice, regardless of the odds.

*NOTE:
President Obama did indeed sit close to President Castro of Cuba and shook hands with him after the memorial service.