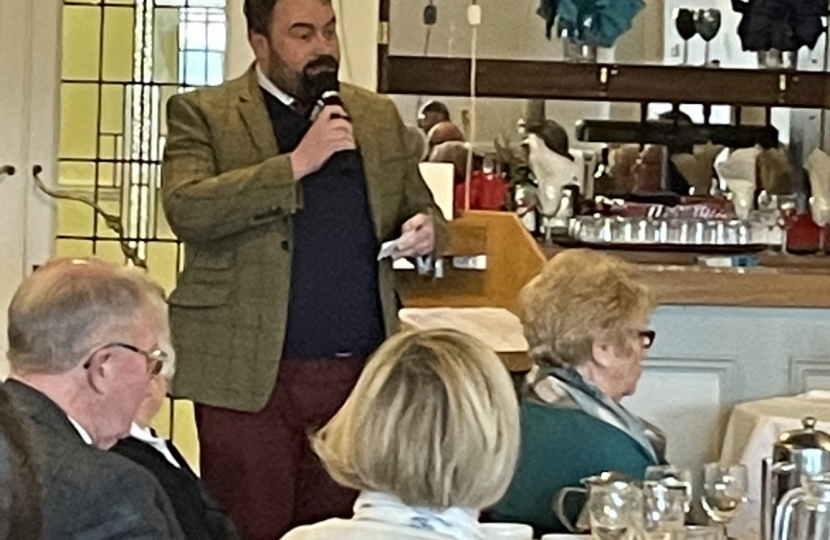 Chris was an informative and entertaining speaker, regaling members with stories of his career as well as answering in depth questions on more pertinent issues in Parliament.

He began his railway career as a train guard on the Waterloo to Exeter line, and progressed to manager for the Bournemouth to Weymouth line. In 2003, he moved from Sherborne to work with major rail operators in London, across the UK and then to Europe in 2010. He returned to the UK railway in 2012 where he became Head of Service Strategy for the railway in the South West. He went on to lead a team of 300 running the UK's best performing train company, creating more train services and better connections for Dorset, whilst delivering the multi-million-pound upgrade of London Waterloo station - the largest in Europe.

In his spare time, Chris enjoys travelling, classical music, national politics and rural affairs and has held various voluntary roles including Chairman of the Institution of Railway Operators, Councillor of Southwark Cathedral and Director/Trustee of the Chartered Institute of Logistics and Transport as well as being a Freeman of the City of London.

Chris, is also a member of the Transport Select Committee and Chairman of the APPG for South Western Railway.

We would like to extend our grateful thanks to Chris for making time to chat with some of our members.  It was lovely to see so many regulars as well as many new members in attendance. Finally, a big thank you as always to Rt. Hon. Tobias Ellwood MP for his generous time and invaluable support.

Professor Swaran Singh has agreed to conduct a one-year review of the Party’s progress on implementing his recommendations.